August 9, 2019-0 Comments on The Dead Sea Scrolls & the Gospel Prophet-Bible Knowledge, Revelation & Inspiration of the Bible

The Bedouin shepherds had no idea they would find one of the most important archeological discoveries of the 20th century that day in 1946. Their search for pasturage led them into a sandy canyon between sheer cliffs on the north shore of the Dead Sea. They noticed an opening in the cliff face and threw in a stone.

The sound of shattering pottery told them something unusual was in the cave. They discovered a few well-preserved pottery jars and a number of ancient scrolls or parts of scrolls. They had no idea how valuable the scrolls were and passed them on to a local priest. 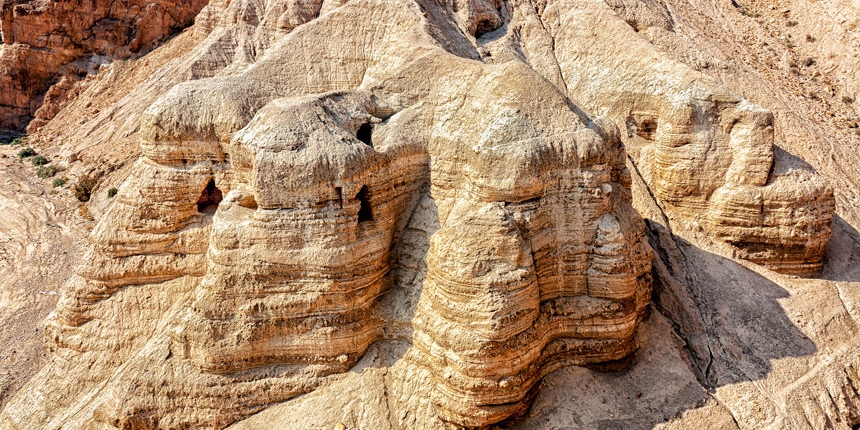 The Dead Sea scrolls found in these cliffs in 1946 have provided wonderful evidence for the accuracy of the Bible.

Eventually, scholars learned about these Dead Sea scrolls and entered them into a museum where they could be preserved and studied. Over the next ten years, archaeologists found 11 more caves in the area with remnants of  a vast library of scrolls, most likely preserved by the Jewish Essene’s.

“These Jewish texts go back as far as 250 BC to as late as 135 AD.  There are about 900 scrolls, but only twenty of them are largely complete. The other hundreds of scrolls consist of fragments, some of them only the size of a credit card. And yet, if you put them all together you get a wealth of information,” says theologist Eibert Tigchelaar. He has been studying the Dead Sea Scrolls for over 20 years.

The scrolls include a commentary on the book of Habakuk, an almost complete copy of Isaiah, rules of conduct, lists of laws and advice on war. Nearly a quarter of the writings are directly from the Bible. In fact, remnants of every Old Testament book except Esther and Nehemiah are included. They are kept in Isreal Museum’s Shrine of the Book in Jerusalem.

As scholars have studied the Dead Sea scrolls over the years, it has become evident that the Bible we hold in our hands is the same Scriptures copied out by Hebrew scribes over 2000 years ago. With rare exceptions, the meaning of the text remains the same as that in our modern Bibles.  God has made sure that His Word was accurately preserved through the centuries.

Friend, you and I don’t have to doubt the accuracy of the Bible!

The most well-preserved Dead Sea scroll is a copy of the book of Isaiah. It is 24 feet long and almost entirely complete. The Hebrew scroll is written on leather in 54 columns and contains all 66 chapters of Isaiah. The scroll dates to 125 B.C. and is 1000 years older than any previously discovered copies of the Old Testament Scriptures.

The scribe who wrote the scroll had beautiful handwriting, but made a number of mistakes and omissions. When he discovered his mistakes, he wrote in the missing parts between the lines or in the margins (just like you or I might do).

“The text of the Isaiah scroll proves that since the time it was written… the book of Isaiah as we have it in the modern Hebrew Bible and in translation in any English Bible has not been changed in any way to the presentday,” says archeologist Siegfried Horn. “Everyone who has worked with this scroll has been profoundly impressed by the unmistakable fact that this two-thousand year old manuscript contains exactly the same text we possess today.” Siegfried Horn, Our Firm Foundation, p. 112.

The almost perfectly preserved Isaiah scroll is 24 feet long and contains the same gospel message contained in our modern translations of the book.

Take a look at Isaiah 53 translated directly from the Dead Sea Scroll. It shows us how amazingly God has preserved our Bibles from human intervention through the years.

“Who has believed our message? And to whom has the arm of the Lord been revealed?
For he grew up before him like a tender plant, and like a root out of dry ground;
He had no form and he had no majesty that we should look at him,
And he had no attractiveness that we should desire him.
He was despised and rejected by others, and a man of sorrows, familiar with suffering;
And like one from whom people hide their faces and we despised him and we did not value him.
Surely he has borne our sufferings and carried our sorrows;
Yet we considered him stricken, and struck down by God, and afflicted.
But he was wounded for our transgressions, and he was crushed for our iniquities,
And the punishment that made us whole was upon him, and by his stripes we are healed.
All we like sheep have gone astray; we have turned, each of us, to his own way;
And the Lord has laid on him the iniquity of us all.
He was oppressed and he was afflicted, yet he did not open his mouth;
Like a lamb that is led to the slaughter, as a sheep that before its shearers is silent,
so he did not open his mouth.
From detention and judgement he was taken away —
and who can even think about his descendants?
For he was cut off from the land of the living, he was stricken for the transgression of my people.
Then they made his grave with the wicked, and with rich people in his tomb —
Although he had done no violence, nor was any deceit in his mouth.
Yet the Lord was willing to crush him, and he made him suffer.
Although you make his soul an offering for sin, and he will see his offspring,
And he will prolong his days, and the will of the Lord will triumph in his hand.
Out of the suffering of his soul he will see light, and find satisfaction.
And through his knowledge his servant, the righteous one,
Will make many righteous, and he will bear their iniquities.
Therefore will I allot him a portion with the great, and he will divide the spoils with the strong;
Because he poured out his life to death, and was numbered with the transgressors;
Yet he bore the sins of many, and made intercession for their transgressions.”
Isaiah 53, as translated from the original Dead Sea Isaiah Scroll

Isn’t that incredible? The Bible you hold in your hands reads almost identically to that copied down by a Hebrew scribe over 2000 years ago!

Try reading the Dead Sea Isaiah Scroll translation side by side with your Bible. Can you find any differences that alter the meaning of the text?

Take a minute to do it now.

Did you find any?

I didn’t. There really isn’t anything that changes the meaning of this beautiful passage about Jesus, our suffering Messiah, is there?

Isaiah has often been called the Gospel Prophet. His writings reveal the coming Messiah more clearly than any other Old Testament prophet. Isaiah 53 is just one of His many prophecies of Jesus.

Many other passages in Isaiah paint a picture of the coming Messiah and the salvation He would bring. And all of them are found in the Isaiah Dead Sea Scroll! 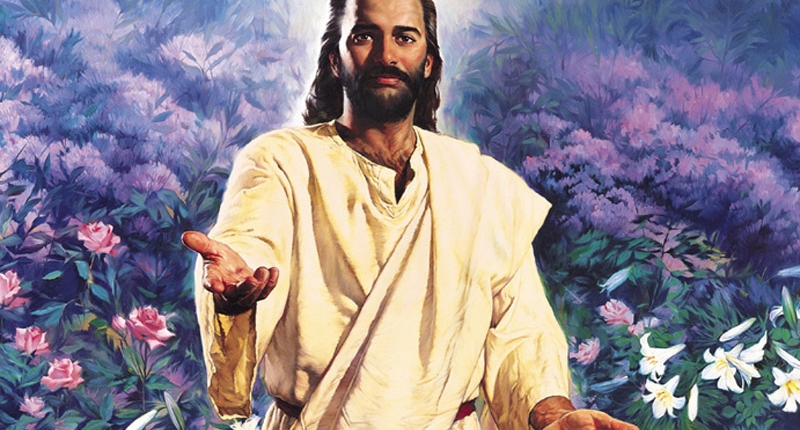 Jesus told the Jewish leaders of His time, “You search the Scriptures, for in them you think you have eternal life; and these are they which testify of Me.” John 5:39

It’s true, isn’t it? They had the book of Isaiah, just like we have it, with all of its wonderful prophecies of Jesus. They could have, they should have, recognized Jesus as the Messiah.

Isaiah faithfully pointed us to the coming Messiah. When Jesus came, He proved to be everything Isaiah had predicted and more. Colossians 1:13-22 tells us just how incomparable Jesus is. “He is the image of the invisible God, the firstborn of all creation. For by Him all things were created… and He is before all things, and in Him all things consist…” Colossians 1:15-17.

Friends, just as Jesus in the comparable Messiah, the Bible is the incomparable Word of God. There is no other book that compares to it. It is not just a good book, a novel, or a holy book. It is the living and enduring Word of the Almighty God of Heaven.

God has accurately preserved the message of the Bible through the centuries. The Dead Sea Isaiah scroll helps us see that we have plenty of evidence upon which to base our faith. We can know that God, and His Word, are trustworthy and a solid foundation for our faith.

“Forever, O Lord, Your word is settled in heaven. Your faithfulness endures to all generations.” Psalm 119:89-90.

Write out Isaiah 53 in your own words. Paraphrase it to include your name and personal pronouns. For example, you might paraphrase verses 4 & 5 like this:

“Jesus bore my griefs and carried my sorrow; but I thought God had stricken, smitten and afflicted him. But it was all for me! He was wounded for my sins, he was bruised for my iniquities; and the punishment for my peace was on Him and by His whipping, I am healed!”

Ask for the guidance of the Holy Spirit as you think and write. And pray that Jesus makes His sacrifice on the cross real to you. Pray that your heart is tender and that you truly understand His love for you.

http://dss.collections.imj.org.il/isaiah – Full digital version of the Isaiah Scroll found in the Qumran caves. This site is hosted by the Isreal Museum and makes the contents of the most important and complete Dead Sea scrolls available to the public.

http://www.hebrew-streams.org/works/qumran/isaiah-53-qumran.pdf – A side-by-side transliteration of the Isaiah Dead Sea Scroll with the Masoretic text and modern Biblical text. Shows how remarkably similar our Bibles are to the text written in Bible times.

5 Ways the Holy Spirit Helps Us Understand the Bible